In a parallel universe, Cinderella would have been opening for previews very soon. Unfortunately, the Gillian Lynne Theatre's doors remain closed, at least for the time being. But at least now we finally get a long-awaited teaser of the show's fabulous musical numbers. Watch a 30-second clip from the music video below of Carrie Hope Fletcher (Heathers, Les Miserables) performing the show's new song "Far Too Late" in an empty auditorium at Her Majesty's Theatre, home to Andrew Lloyd Webber's Phantom of the Opera.

In the full video clip, which can be viewed here on Vimeo, Andrew Lloyd Webber called Carrie Hope Fletcher a "fantastic singer" and made a point to dedicate the debut of the new song "Far Too Late" to the UK Government and the governments of various countries, stating: "We're getting to the point where it is far too late. We want to get back to the theatre again. We want to be open." 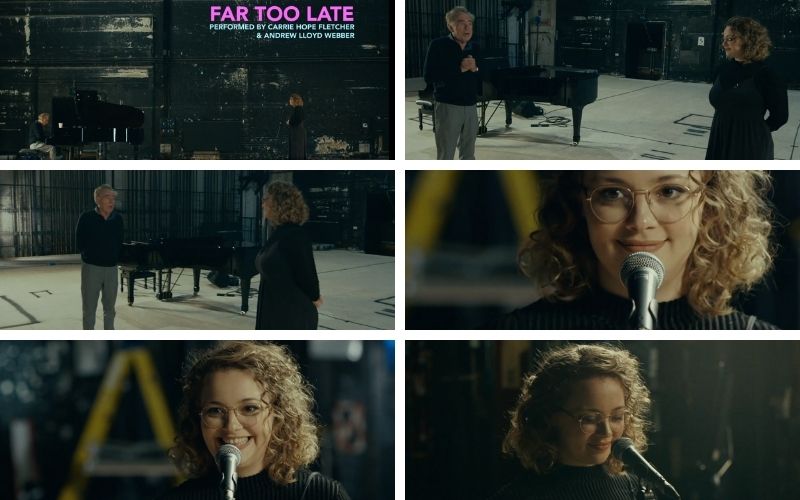 Cinderella to open for previews on 19 March 2021

Lloyd Webber's eagerly anticipated reimagining of Cinderella is set to dazzle West End audiences with her fairy godmother's spellbinding magic. The musical will come crashing the ball by pumpkin carriage on 19 March 2021 at the Gillian Lynne Theatre in London, where it is now booking until 24 October 2021. Official opening night is scheduled to take place on 7 April.

Written by David Zippel (City of Angels) and Emerald Fennel (Killing Eve, A Promising Young Woman), the new Cinderella musical takes everything you know about the classic fairytale and turns it on its head, offering something fresh and different to the table. The production is directed by Laurence Connor and features choreography by JoAnn Hunter. It stars Carrie Hope Fletcher in the eponymous role opposite Victoria Hamilton-Barritt as the Wicked Stepmother. Further casting and creative team are to be announced in due course.

About the star of Cinderella Carrie Hope Fletcher

Carrie Hope Flecther is no stranger to belting big musical numbers and is perhaps best known recently for headling Heathers at the Theatre Royal Haymarket. Other stage credits of hers include Mary Poppins at the Prince Edward Theatre, the UK tours of Chitty Chitty Bang Bang and The Addams Family, and the role of Fantine in Les Miserables at the Sondheim. She is also a best-selling novelist with her most recent book Into The Spotlight having just been released.

Cinderella Gillian Lynne Theatre tickets now available from £24 and up!

The clock is ticking and you'll want to get your Cinderella tickets before it strikes midnight! Don't wait until it's far too late, secure the best seats at London's Gillian Lynne Theatre at the best prices whilst availability lasts!

🎟️ Book tickets for Cinderella showing at the Gillian Lynne Theatre from £24 and up!
Tagged as
NewsProductionsNew Shows + TransfersVideos